A very good morning from Team Multipie! We present you another edition of Multipie Weekly, where we summarize market trends and interesting developments from the week gone by.
So grab a cuppa of your morning drink and let’s get started!

The Week (and month) Gone by…🗓

Indian markets had another green week with Nifty and Sensex closing at fresh highs.

We dissect the rally via a snapshot of Sector-wise returns over the last week and month.

IT, Power & Real Estate were the big gainers last week, while Financials are seeing some tiredness. Overall, all sectors were in the green, indicating continuing strength and optimism in the market.

Interestingly, the rally is moving towards small and micro caps over the last week & month as you can see in the chart below:

Here is what we found out:

Let us know what you think?

Why we think this matters:

The curious case of retail investors buying DHFL and why one shouldn’t – stock to be delisted!

The NCLT approved the resolution plan of Piramal Group, bringing the long standing insolvency proceedings of DHFL to near closure.  We found it shocking to see that ~2 crore shares exchanged hands on June 8th and June 9th, mainly transferred to clueless retail investors. This is more shocking given the resolution plan clearly states that the company’s entire share capital will be cancelled, a.k.a the value of equity is zero.
PS: Trading in DHFL will be suspended from Monday, June 14, 2021.

We draw attention to Section 53 of Insolvency and Bankruptcy code (IBC) that lays down order of payment under IBC resolutions. Equity owners stand last in the waterfall and any value accrues ONLY when all other stakeholders are settled off. You can read more on that here.

We explain the sequence of events at DHFL and the resolution below:

So Apple wrapped up it’s flagship annual event, WWDC, earlier this week, and we couldn’t help but tell you about the barrage of new features and software updates it released. Thankfully, these won’t burn a whole in our pockets.

Privacy: Freaked out every time you spoke to your friend about a product and immediately got an ad on Insta? Apple will now provide you with a report of which apps have used your phone to track your activity so you can decide to give permissions accordingly. Even Safari becomes safer with an iCloud+ subscription that completely hides your information from any third party websites or even Apple itself!

Endnote: These announcements are yet another addition to Apple building an unmatchable ecosystem around its products and software. Very soon, we might see a considerable shift of users from Android to Apple as the premium price might start justifying itself.

This is for all the Crypto enthusiasts and skeptics – On Friday, 11th of June, the Enforcement Directorate served a show cause notice to Indian crypto exchange WazirX and its directors under the Foreign Exchange Management Act (FEMA), 1999 for transactions involving crypto worth Rs 2,791 crore.

Brief: WazirX, the largest Crypto exchange in India, is being investigated under FEMA as a part of ongoing investigations into money laundering through certain Chinese betting applications.

“During the course of the investigation, it was seen that the accused Chinese nationals had laundered proceeds of crime worth Rs 57 Crore approximately by converting the INR deposits into Crypto-currency Tether (USDT) and then transferring the same to Binance (exchange registered in Cayman Islands) Wallets based on instructions received from abroad”.

This made it possible for users to “launder” money / indulge in illegitimate activities by transferring “valuable cryptocurrencies” without the risk of being tracked or audited.

Response:  WazirX director Nishchal Shetty tweeted that WazirX did not receive the show cause and that they remain committed towards complying with all required laws and agencies. They also agree to fully cooperate if they were to receive an official communication for the investigation.

Implication: It will be important for crypto participants to keep a watch out for ED’s actions as it could have immediate effects on those using WazirX for crypto trading. Also, it could have a structural impact on the Indian Govt’s stance on crypto, and delay any possible hopes of statutory approval. Interestingly, WazirX is effectively owned by Chinese crypto exchange Binance.

Chart of the week

Our chart of the week is called – “Refining: In Transition to a Golden Age”

As per Morgan Stanley, India’s Gas market is poised for the next up-cycle, as connectivity, mobility and availability of domestic gas rise. Strong chemicals demand, consolidation in global refining, fuel price hikes and refinery upgrades bode well for oil marketers.

Please share with your friends if you found this helpful and subscribe at multipie.co to start receiving these as a weekly digest every Sunday!

Hey there!
A very good morning from Team Multipie!

We are starting our weekly newsletter digest called Multipie Weekly and going forward, it will start hitting your inbox every Sunday morning with handpicked recommendations to watch, read and summarize the week gone by.

Grab a cup of tea or coffee and let’s get started!

Markets have been in green territory over the last week and month. We prepared a snapshot of industry wise returns over recent time periods.

Recently, a PLI scheme of ₹18,100 crores was notified to incentivize infra for EV batteries. Given the higher share of battery in cost of a car under EV ecosystem compared to fuel cars, there have been deliberations on in-house production versus outsourcing by OEMs. Powerhouses such as RIL, Tata, Adani have shown interest in setting up Lithium Ion plants.

We read a note from Morgan Stanley on their outlook for battery players under PLI. Here are our key takeaways:

While end outcomes are yet to be seen, Indian automotive segment is clearly heading into exciting times..

Have the rules of investing changed? 📈

Does the classic investment philosophy of buy right, sit tight still work? Have the rules of investing changed forever? Many have questioned this recently, given the rise of meme based investing. We found this article on the topic by @ReformedBroker quite relevant and interesting.

Multipie view: Digital era doesn’t alter the laws of supply & demand. It just shortens the cycle, squeezing into higher peaks & troughs. In short, we believe the classic rules of investing are timeless.

Can you play the long game in investing?

Moving from one extreme of meme based investing, @VJ_Rabindranath wrote this fascinating story about his father’s investing journey called “The next Warren Buffett”. It talks about the other extreme, of playing the long game of investing. This is a must read.

We read through RBI’s Annual Report that was released last week and here are some summary takeaways: 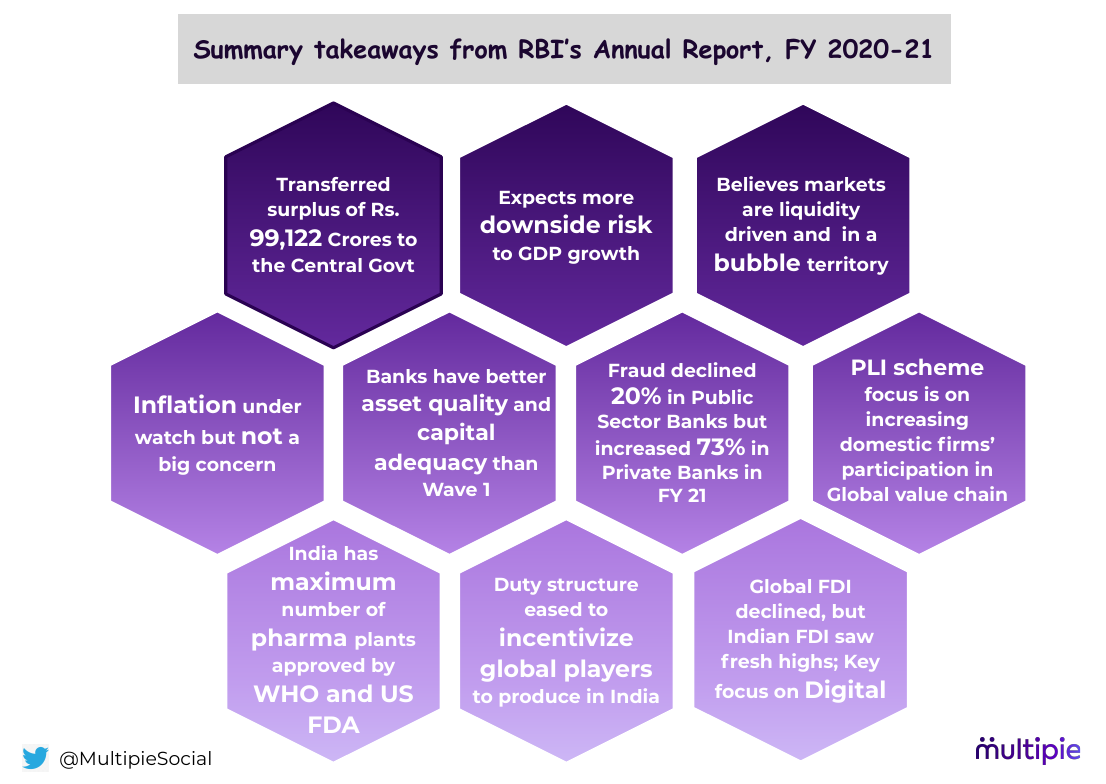 This is clearly not a replacement to reading the original Annual report document, which has great insights.

Adani Group is THE most successful demerger story in India Inc. From a market cap of ~68,000 cr for Adani Enterprises pre demerger, the group market cap now stands at over 9.5 lakh cr, ~14x in 6 years. Here is the break-up across group companies: 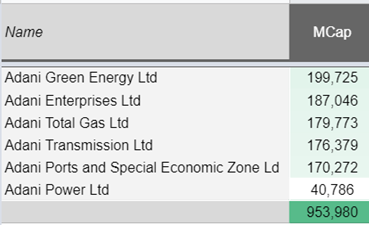 We found this post on Gautam Adani’s life story and some trivia interesting.

Morgan Stanley is bullish on the outlook for modern retail format and especially Avenue Supermart (DMart). It expects its EPS to rise from 18.1 in FY21 to 42.2 by FY23E. Here are key takeaways for you:

That’s all for this week. Please share with your peers if you found this helpful and subscribe at multipie.co to start receiving these as a weekly digest every Sunday!

One interesting development during the week was that Bajaj Finance got RBI approval to issue and operate “Semi-closed” Prepaid Payment Instruments (PPI) with perpetual validity. Here is an explainer note on what this means for Bajaj Finance and potential implications.

What are Prepaid Payment Instruments?

PPIs are instruments that facilitate purchase of goods & services or interpersonal money remittances, etc, against the value stored on such instruments. While PPIs aren’t entirely new (remember Sodexo coupons, Edenred cards), it was formalized by RBI in 2017. Here is the full list of RBI authorized PPI license holders.

Okay, and how are these different from Credit Cards?

Prepaid payment instruments come with a pre-loaded value and in some cases a pre-defined purpose of payment (more on this later). PPIs makes it more convenient to get credit at the retail store, or to get an EMI without a physical credit cards.

What are the various PPI instruments?
RBI categorizes 3 types of PPI wallets – Closed, Semi-closed and Open.

We explain the same via the image below:

Let’s understand the landscape of PPI players in India. As we can see in the image below, single use closed wallets were prominent earlier and have since given way to mostly semi-closed PPIs/ e-wallets.
Open wallets such M-pesa (ICICI Bank) and Payzapp (HDFC Bank) have seen limited success.

This brings us back to the topic of the day – Bajaj Finance (BF). What does the PPI license mean for them?

BF had indicated its’ Vision 2.0 via “Bajaj Pay” in their Q3 FY2021 earnings call, an integrated payments solution of UPI, PPI & EMI Store (zero EMI). As per analysts, this should help Bajaj Finance in increasing cross-selling. The image below from the investor presentation provides some color:

Over time, Bajaj has built a network of over 1 lakh merchants and ~5 crore customers. The two together create a base for a strong marketplace model, wherein payment capabilities was a missing link. While Bajaj Finance has grown at over 30% in last few years, it needs new legs to maintain similar growth trajectory, which is a key reason for its valuation premium. See recent customer growth metrics via a Business Standard article:

How big can the semi-closed PPI license approval be for Bajaj Finance?

As per a PwC publication, revenue pool of PPIs was estimated to be at INR 253 BN in FY2021 and projected to grow to INR 497 BN in FY2025P, growing at a CAGR of 18.4%. With Bajaj Pay, the company plans to create a robust ecosystem to tap into this large opportunity.

While semi-closed PPI e-wallets have their limitations, there have been two key recent regulatory changes that have significantly expanded their playing field:

With these changes along with allowing Video KYC, it is expected that e-wallets would see a comeback and may soon function close to a Bank account.
More details in this article on The Mint: https://t.co/lqIPrI4Ape?amp=1

Conclusion:
While market reaction to this has been neutral, credit card expert Sandeep Srinivasa, founder of RedCarpet Up and a Payments and Credit cards expert had an optimistic take on this: “NBFC O/D line + prepaid + 2lakh limit + cash withdrawal + mandatory UPI linkage could be killer.”

We will continue to monitor developments here. Let us know what you think.

Note: This is not an investment advice on BF.